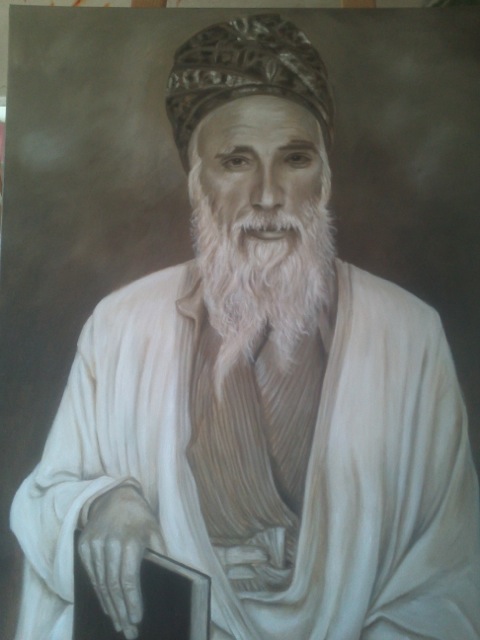 Rashi explains that a good name is better for a person than good oil, and on the day of death the name is better than on the day of his birth. For this reason a good name is compared to good oil more than to other liquids for if you put water on oil it floats and rise and is recognizable but other liquids are absorbed by water. God oil runs down (Psalms 133.2) while a good name ascends and lasts forever (Beraishit 12.2; Psalms 72.17). When Miriam was born no one knew who she was but when she died the Well disappeared; when Aaron died the Pillar of Cloud disappeared; when Moses died the Manna ceased.

A good name burns longer than good oil. This conclusion is reflected in the following division of the verse:

Abraham had the best name of all. He shall return at the end as the Son of David as His name burns longer than all oil.
Posted by Unknown at 10:01 PM No comments:

Email ThisBlogThis!Share to TwitterShare to FacebookShare to Pinterest
Kohelet 3.1
קהלת 3.1

The number 6030 is tenfold the gematria of the following significant words:

On that day Hashem the King had saved the Children of Israel by a Hairsbreadth!
Posted by Unknown at 7:56 PM No comments:

The verse can be divided so:

The number 182 is the gematria of the name “Jacob”- יַעֲקֹב. Here then we find the connection to the previous verse-“Esau hates Jacob”- עֵשָׂו שׂוֹנֵא לְיַעֲקֹב. The “People of Mordechai” are the “People of Jacob”-“the People of Israel”.

The number 702 is the gematria of the word “Shabbat”- שַׁבָּת precious to Hashem and corresponding to the World to Come which Esau despised.

From this verse we learn that two lots were cast-one for the day and one for the month. Hence the festival is known as “Purim”- פוּרִים the plural of the word “Pur”- פּוּר.

The word “Pur”- פּוּר is the Persian word for “lot” (Ibn Ezra). Haman cast lots to determine in which month and day he would succeed (Rashi). The verse is silent as to who actually cast the lot- הִפִּיל פּוּר.
The Pur was cast
הִפִּיל פּוּר
411+2 words=8

The Talmud teaches us that all the months turned out favorable for Israel except the month of Adar. Moses died on in this month on the 7thof Adar. He rejoiced thinking that he would succeed. He did not know that Moses was also born on the 7th of Adar (Megilah 13.b). See my Torah commentary to Parshat Shmot as to the significance of the dates of the conception and birth of Moses. He was born three month premature.

The day of Purim, the 14th of Adar is the day that Moses would have undergone circumcision if he would have been circumcised. This day of circumcision the eighth day after birth is considered the “true” birthday of a Jewish male-when he becomes part of the Jewish People and enters the “Covenant of Abraham”. This is the matter that Haman did not understand as he despised Hashem and everything connected to Abraham the founder of the Jewish religion.

According to Judaism if a child is born circumcised he has to undergo a ceremony and slight procedure (fine cut) called “Hatafat Dam”- הטפת דם (blood-letting) to ensure that no part of the foreskin- ערלה is pressed into the male organ thereby slightly covering its “crown”-עטרה (Shabbat 135.a; Tur 263). The ceremony is performed without reciting the traditional blessings and is to be performed on Shabbat if the 8th day falls on Shabbat.
Hatafat Dam
הטפת דם
538+2 words=540=1+8 or 1098=18

Here then we find the reason why the “lot” fell on the 14th of Adar the day that Moses underwent this ceremony when he was born and “his crown” was “released” from pressure. In his merit we were redeemed from the pressure of exile and annihilation in Bavel and given back our crown of freedom to return to the Land of Israel to rebuild the Temple.
The verse relates of the 12th year of the reign of Achashverosh and the lot falling in the 12th month. This relates to the 12 tribes of Jacob that Haman sought to annihilate.
The twelfth year- the twelfth month
שְׁנַת שְׁתֵּים עֶשְׂרֵה-חֹדֶשׁ שְׁנֵים עָשָׂר
3357=18

It is no coincidence that I write these words on Yom Sheni the 16th of Ellul 5775 (Monday 31st August). In the World of the Heavens today they are celebrating the festival of Purim!

The King is in the Field!
המלך בשדה!